Assinar RSS
Katelyn Seary is a revelation of Pop music started singing when she was 6, and released 3 songs and will be releasing 3 more soon. 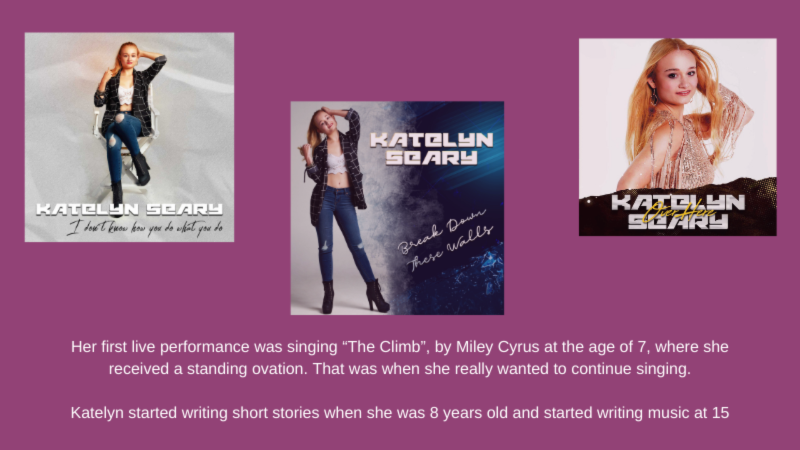 Katelyn started singing when she was age 6.

Her first live performance was singing “The Climb”, by Miley Cyrus at age 7, where she received a standing ovation. That is when she really wanted to pursue singing.

Katelyn started writing short stories when she was age 8 which parlayed into writing music at age 15. She has a whole notebook full of songs ready to share.

After learning how to write music she was able to put together the two things she absolotley loves to do, writing and singing to her own lyrics.

Fun facts, before COVID 19 Katelyn was a Jr. International Latin Ballroom champion with her partner Vlad, in the USA. She was also fortunate enough to be coached by Henry Byalikov, Tony Dovoloni, and Val Chmerkovskiy during this timeframe. Katelyn loves to draw and is very artistic. Katelyn is also a chocolateholic! :-)

Before COVID 19, Katelyn enjoyed modeling and help raising money for children with autism and visiting retirement homes and singing to try to make the residents happy. Katelyn would like to go back to these causes again when it is safe to do so.

Katelyn just currently released “Break Down These Walls, “I Don’t Know How You Do What You Do”, and “Over Here”, which you have.

Katelyn just this past week went back into the studio in New York City to record 3 new songs she wrote that will be released soon called, “T.I.R.E.D., “You Said”, and “All Night Long”.

She feels some of her songs have a dance and funky vibe like one of her favorite groups the Jonas Brothers.

Some of her other favorite singers that she looks up to are Ariana Grande, Dua Lipa, Demi Lovato, and Miley Cyrus.