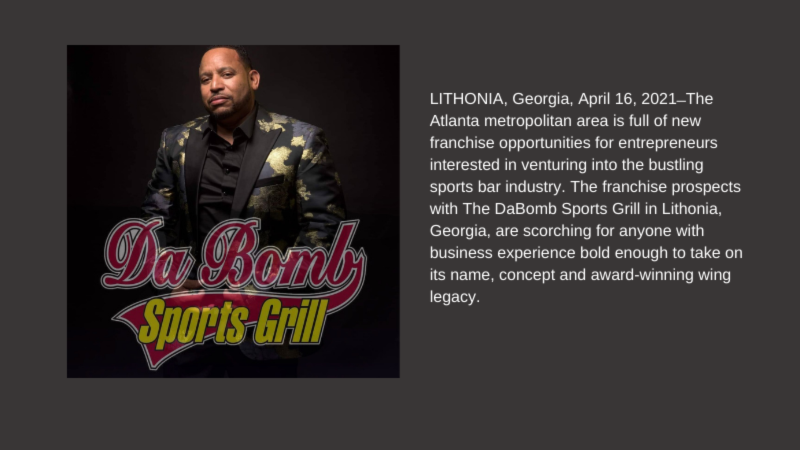 LITHONIA, Georgia, April 16, 2021 ̶ The Atlanta metropolitan area is full of new franchise opportunities for entrepreneurs interested in venturing into the bustling sports bar industry. The franchise prospects with The DaBomb Sports Grill in Lithonia, Georgia, are scorching for anyone with business experience bold enough to take on its name, concept and award-winning wing legacy.

DaBomb's Sports Bar franchise portfolio is as broad as its food menu, which includes more than 30 wing flavors. From its traditional bar food offerings to southern-style soul food, DaBomb has made a culinary name for itself. "Incredible", "the best in town", "infamous", "filling" and "full of flavor" are how some of their customers describe their wings. However, his biggest award for "Best Wings in Atlanta", awarded at Wing Fest 2007, sums up the restaurant's gastronomic talent. Not just an ordinary sports bar, DaBomb competes with the best of them in an area where wings are a staple food and sports are the mainstay. DaBomb has been in business since 2002 in eastern Dekalb County, home to the annual Wing & Rock Fest (hailed as the “third largest chicken wing festival in the country”). The sports bar is located at 2912 Evans Mill Road in Lithonia, which is about 19 miles east of Atlanta (home of the Atlanta Braves MLB franchise; NBA's Hawks; NFL's Falcons; WNBA's Dream; and MLS Atlanta United FC).

“We founded DaBomb Sports Grill based on our passionate love of sports and to provide the most tempting and delicious hot wings that our customers have ever tasted,” says owner Gary DaCosta.

He definitely achieved that, but DaBomb's attraction is not just about his food or his ability to attract sports fanatics to his college football encounters on Saturdays or his NFL ™ daytime and nighttime parties on Sundays. The Sports Bar franchise is also exploding the sports bar scene with its unparalleled entertainment. This busy restaurant during the day turns into a vibrant nightclub at dusk, and until 3:30 am on the weekend and 4:00 am on weekdays. DaCosta, the alter ego “D.J. Caesah ”, keeps the beats and parties popping up all night while he plays records in person at the establishment.

Tasty food, entertainment and the social scene have propelled DaBomb to the top of the sports bar game, but now it's time to spread its wings to other areas of Georgia and the U.S.