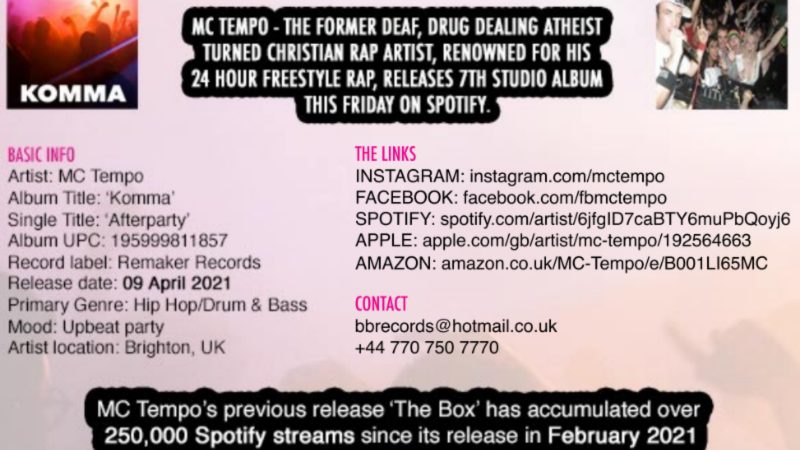 MC Tempo - the former deaf and atheist drug dealer who became a Christian artist of RAP, known for his 24-hour freestyle RAP, releases his 7th studio album this Friday on spotify

MC Tempo's previous release, The Box, accumulated over 250,000 Spotify streams since its release in February 2021

THE ONLY AFTER THE PARTY

The main track on this album is called ‘Afterparty’. Raps MC Tempo about returning to clubs / raves / festivals after covid. This is a party track with a catchy chorus that amalgamates the transition from rap music to drum and bass. The concept of ‘Afterparty’ is a double meaning that expresses as the definitive afterparty is not the end of the night, but the end of life

MC Tempo's newest release, ‘KOMMA’ takes us to another twist in the intriguing rap artist’s journey. This 16 track album is built around 5 main tracks that are compared to remixes, instrumentals, fillers and acappella’s. The theme of this album comes from the title ‘KOMMA’, the Greek word for party. The unique element of this project is that each song starts out as a hip-hop track, but transcends drum & bass at the end of the song! Extreme metaphors, cheeky comments and provocative jokes, all equate to expert lyricism exhibited by MC Tempo as he leads us through the early evening stages, indulging in the thrill of live events and drinking a lot ... before reaching the final destination ... the ‘Afterparty’.

HISTORY OF THE ARTIST

Coming from an abandoned home in England, MC Tempo (MarkEdwards) was expelled from 4 schools after her parents' divorce and her sister's death. He started writing aggressive rap songs to express his pain he was feeling in his heart. He later became involved with drugs and drug trafficking to finance his addiction. He found performing in the underground music scene at the age of 15. He later lost his hearing in his left ear while performing at an illegal rave event. Progressing to organize illegal rave events, he met a Christian that took him to the 'we are Emmanuel church' in Brighton, UK. It was here that he was prayed for in name of Jesus and had his hearing miraculously restored. As a result, he became a Christian and his music naturally followed suit.